The key feature of this site is the pylon. I have grown to love this dominating pylon and the industrial progress that it represented. I am grateful to an allotment holding neighbour for telling me about a poem written about pylons. I did some research, and discovered there was not one, but two poems, both published in 1933. Stephen Spender (1909-1995) wrote “The Pylons” and Stanley Snaith (1903-1976) “Pylons”.

The Central Electricity Generating Board was given permission by the Town Planning and Buildings’ Committee on 22 November 1963 (1) to erect “the tower” the first of five from Reading to Burghfield. The allotments were already there and the committee had earlier raised no objection to the erection (2). Terms were agreed with the Central Electricity Generating Board of 50 years at £5 per annum and an easement of £50 for the overhead cable. The income from the easement was apportioned at £10 to the allotments sub-committee and £40 to the Highways and Drainage Committee (3).

The allotments with the pylon appear on the 1966 Ordnance Survey maps of the area. They lie between the factory units of Elgar Road and the River Kennet and adjacent to Waterloo Meadows recreation area.

Elgar Road was developed at the end of the nineteenth century. By then Waterloo Kilns were on the site where Robert Cort’s premises and industrial estate are today. The kilns were owned by Messrs Poulton and Son. Mr Poulton and his father-in-law Mr Swain were both recorded as living on Milman Road in Kingsclere Villa and Highclere Villa respectively. In 1908 the kiln was sold to S & E Collier (4). 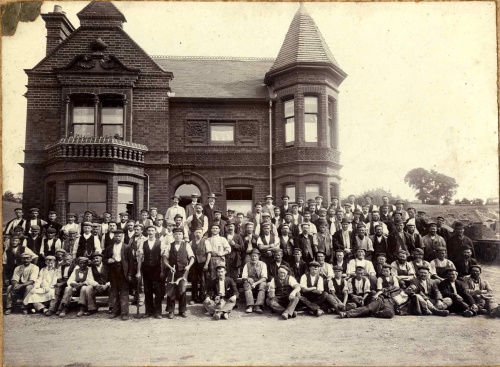 Poultons Staff in front of the Offices at 185 Elgar Road c.1900. Reproduced with the permission of Local Studies Collection, Reading Central Library

The history of Waterloo Meadows is documented in “Waterloo Sunrise”, edited by Julie Wickham and Mike Cox. An area subject to seasonal flooding it was used as grazing and farmland, later as a council tip before becoming the allotments, recreation area and natural conservation area that we see today.

I was allocated my allotment in May 2010 – at last – I had been on the waiting list for about a year. It is coming along very nicely now, looking moderately cared for or moderately neglected. 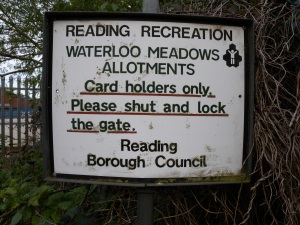